Building up a complete IoT world without writing a single line of code.

tipcontrol is a microcontroller-based, rapid development environment for any Internet of Things application. It's a hardware building block system which includes an operating system, configuration application and a cloud service.

Modern technology requires modern tools. To control homes, robotics and machinery ,sensors and controlling units are needed. That’s where tipcontrol comes in. Easy to assemble and powerful in use. There are dozens of sensors and actuators which can be assembled together. After that, it's all about creating logic and letting the sensors communicate with each other, even wirelessly.

The stackable circuit board allows different sensors and actuators to be assembled on one board, according to the specific requirements of each IoT project. It is a building block system for hardware. tipcontrol not only comes with the operating system OSµ for micro controllers, it offers a live simulator software with drag and drop functionality for OSX, Windows, Linux, iOS and Android.

There is still more to say: tipcontrol has an integrated MESH technology for connecting an infinite number of micro controllers and sensors or actuators together. All of them can be controlled with drag and drop. An event & macro designer gives tipcontrol AI functionality. That artificial intelligence can control one micro controller, a group or all the units in the cluster. There are also extensive APIs that software developers can use to write their own applications.

Internet of Things and Edge Computing

Digital business initiatives generate data that is processed more efficiently when the computing power is close to the generating object or person. Edge computing solutions meet this need for localized computing power.

Approximately 10% of the data generated by enterprises is already created and processed regardless of a traditional centralized data center or cloud. By 2025, Gartner predicts that this figure will reach 75%. Edge computing has enormous potential to enable digital initiatives supported by the Internet of Things.

tipcontrol can be the base technology enabeling a new generation of intelligent and meshed IoT applications, such as industrial applications, home control, environmental applications, security systems, event access management, automotive and lots more.

tipcontrol is designed to be easy to use by anyone regardless of technical know-how.

Designing a project can be as quick as a few keystrokes and can effortlessly be upgraded to more complex designs.

Just plug as many actuators or sensors to the board as you need. There will be a load of caps available for all kinds of requirements.

Connect the board to the Operating

System OSµ and configure it with the

Using the tipcontrol cloud you can

register as many tipcontrol boards

as you need. They can then

communicate with each other from

any place in the world while

connected to the internet.

The tipcontrol Project was started to support the hardware and software community to significantly improve the status quo of the IOT market.

tipcontrol is a microcontroller based, rapid development environment for any Internet of Things application.

It is a complete IoT development kit including micro controller, an operating system, configuration software,
and cloud infrastructure so you can quickly build a wireless IoT system 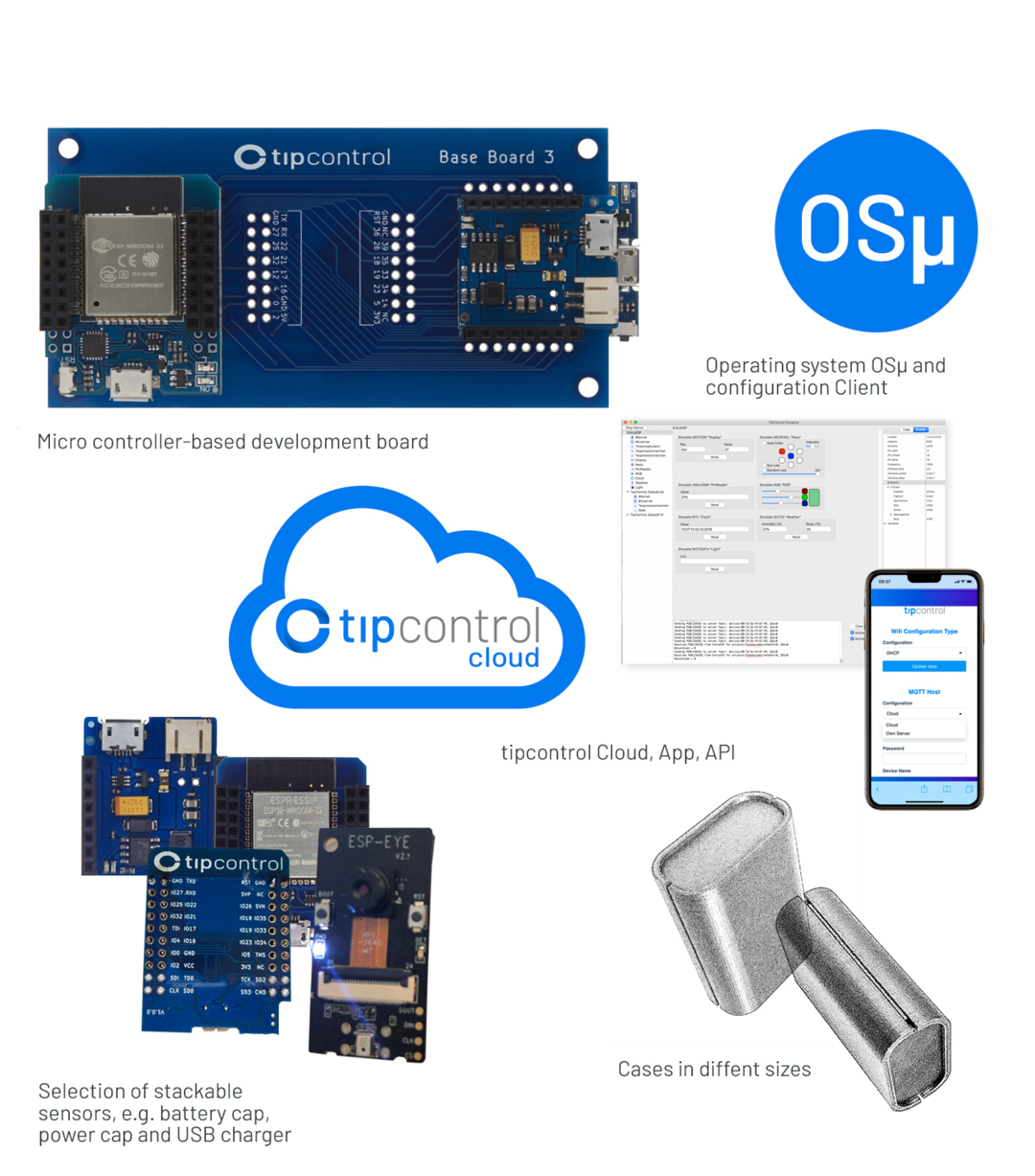 How can you support the tipcontrol project?

We are launching a kickstarter campaign in February, 2020. Sign up for the tipcontrol
newsletter to stay tuned about the campaign.

Join the Tipcontrol Experts Board to get even more involved in the tipcontrol project: We will
send you frequently surveys to check what experts are thinking about the market and
different approaches we evaluate. If you are an active expert, you will be pre-informed about
project insides and benefits like goodies or test-packages.
Of course you can quit your free membership in the Tipcontrol Expert Board at any time.

Join now the tipcontrol Experts Board

We really wanted to bring the developer scene and the hardware guys closer together to give the field of Internet of Things a boost. The idea of the project is pretty simple: We wanted to develop an operating system and a cloud service, where all the drivers and C++ stuff for the hardware components are already built into the operating system.

Looking at the current IoT market, we felt the need of having an easy-to-use way of connecting hardware with software. We wanted to realise a huge project as efficiently as possible. And we wanted to have the greatest possible flexibility without hiring freelancers with special programming skills. That's why we developed tipcontrol.

CEO of the tipcontrol project

The tipcontrol project addresses the whole world of developers, technology experts, digital educational area, and all the guys loving DIY projects. All users of Raspberry PI (there are more than 25 billion users worldwide), Arduino or derivates might have a look at tipcontrol because it is a completely new approach to the development of IoT.

Where do we stand withthe project and what are the plans for the future?

Since 2017, more and more supporters helped to grow the project. In the summer of 2019, the
3rd generation of the tipcontrol base board was produced. More than 100 caps and actuators
are already added to the cloud and more will come. The registration via tipcontrol cloud is up and
running since October, 5th. To get the project rocking, we decided to start a crowdfunding
campaign on Kickstarter, which will be launched in February, 2020.

tipcontrol is able to create mesh networks. This offers much more possibilities when installing several units in one area and offers additional functionality.

"For beginners and professionals. For learners, DIY fans or as a great tool for software developers. Create fully event-driven IoT applications by simply using drag & drop. Combine them into a mesh network or let them work as a stand-alone device. Connect hundreds of sensors and actuators so they can communicate with each other. All this without writing a single line of code."

The simplest way to step into the world of IoT. Control almost anything. Build complex logics within minutes instead of days or months. tipcontrol means 'microcontrollers for the rest of us.'

tipcontrol is a complete IoT Kit. It includes microcontroller, an operating system,
configuration software, and cloud infrastructure which is needed to quickly build
a wireless IoT system. 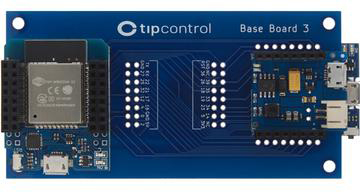 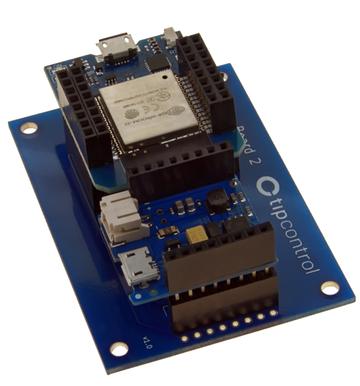 You may integrate hundreds of sensors & actuators externally. Some of them are made
stackable - these are called caps. The driver for those caps is pre-installed on the
development board.

The following caps are available: 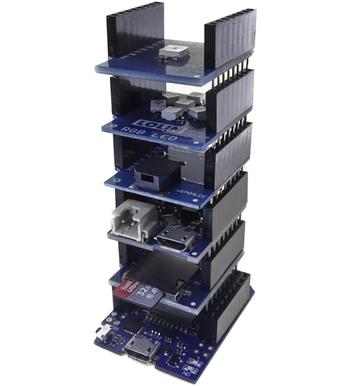 OSµ is the operating system within the microcontroller. There are already all drivers for all
available sensors and actuators pre-installed. 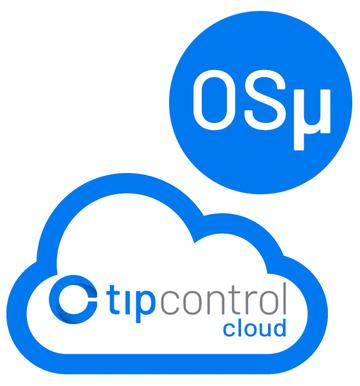